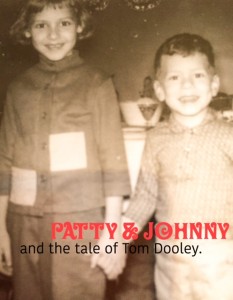 When I was 8 or 9 my brother John and I had a pet turtle named Tom Dooley, I think the name came from a popular song at the time. Anyway, he disappeared and after weeks of searching we all gave him up for dead. Then months later while we were having dinner, Tom crawled out from under the refrigerator! We were all so excited to see him, my Dad picked him up, put him on the table and gave him a pea. Moments after he swallowed it he died. True.